This post is a follow up on part 1 where we focused on retrieving information from our devices using NetPalm. In part 2, we will focus on changing/updating information on our device. Again, we will use NetPalm’s API to do so, yet NetPalm will use different underlying tools each time.

In this use case, we want to change some configuration on our device. We will do the following:

First, let’s get an overview of the existing interfaces. We will be using the method we learned in use case 1 from part 1 above. 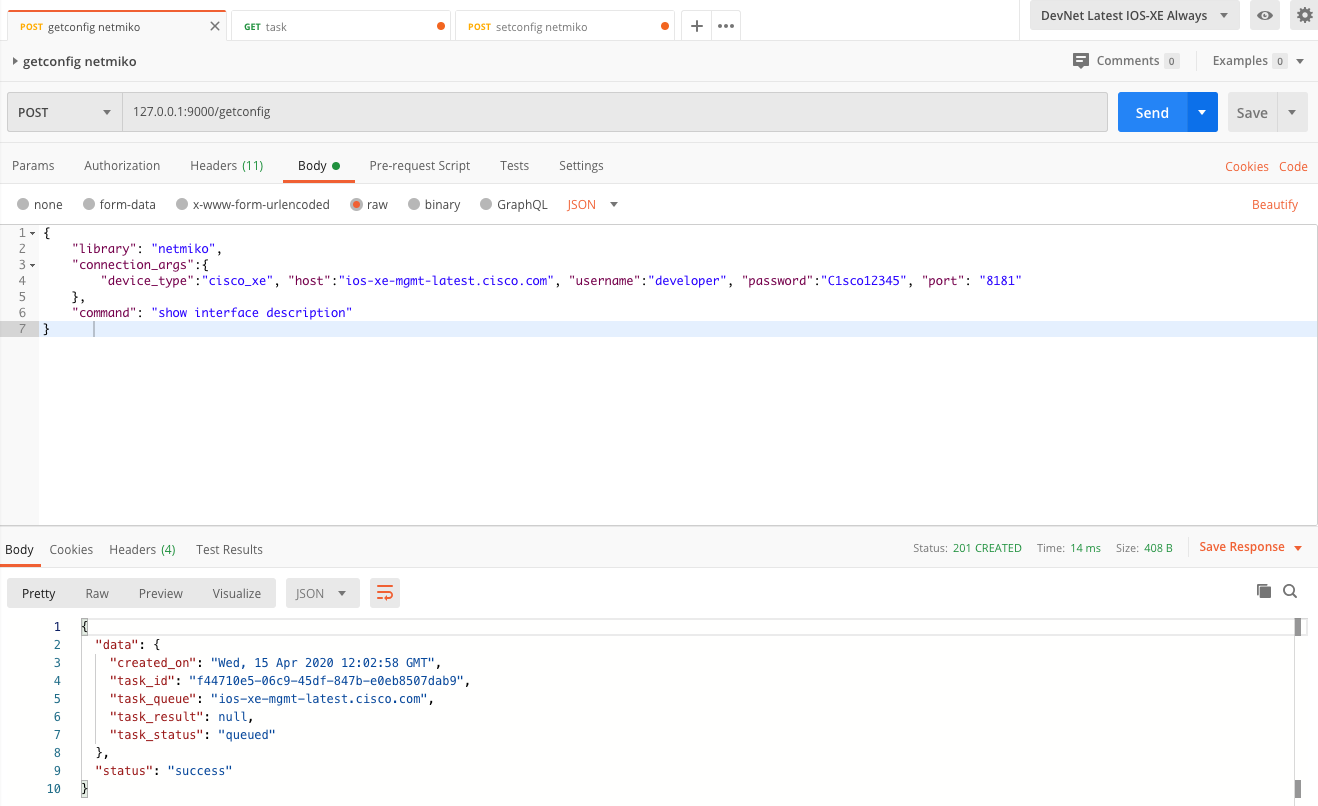 Let’s execute the task and you will see we get an overview of all interface descriptions, just as we requested. 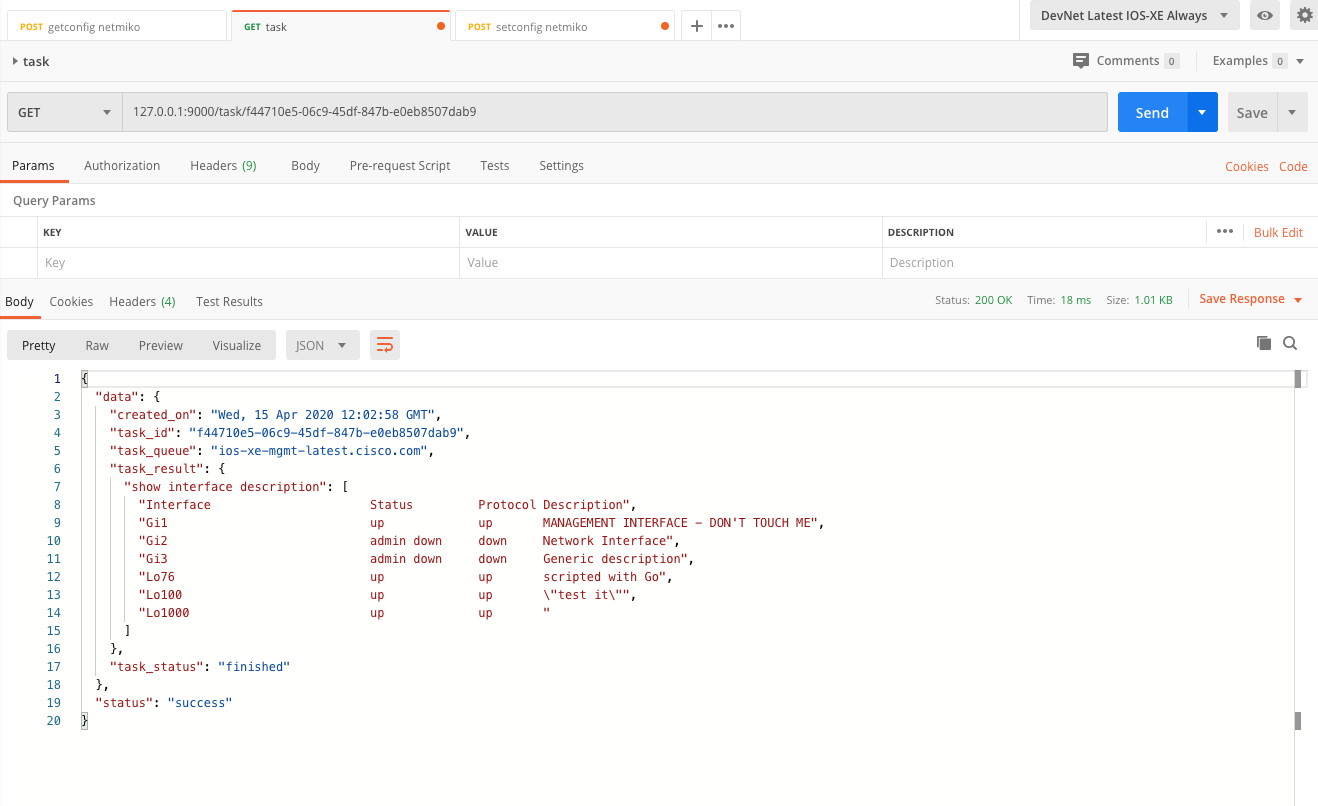 Next, we will change the description for interface GigabitEthernet3. We can do this via the setconfig method as documented here.

You will see that in the config attribute, we pass the commands that we want to execute on our device. Please note that Netmiko does not require a conf t. 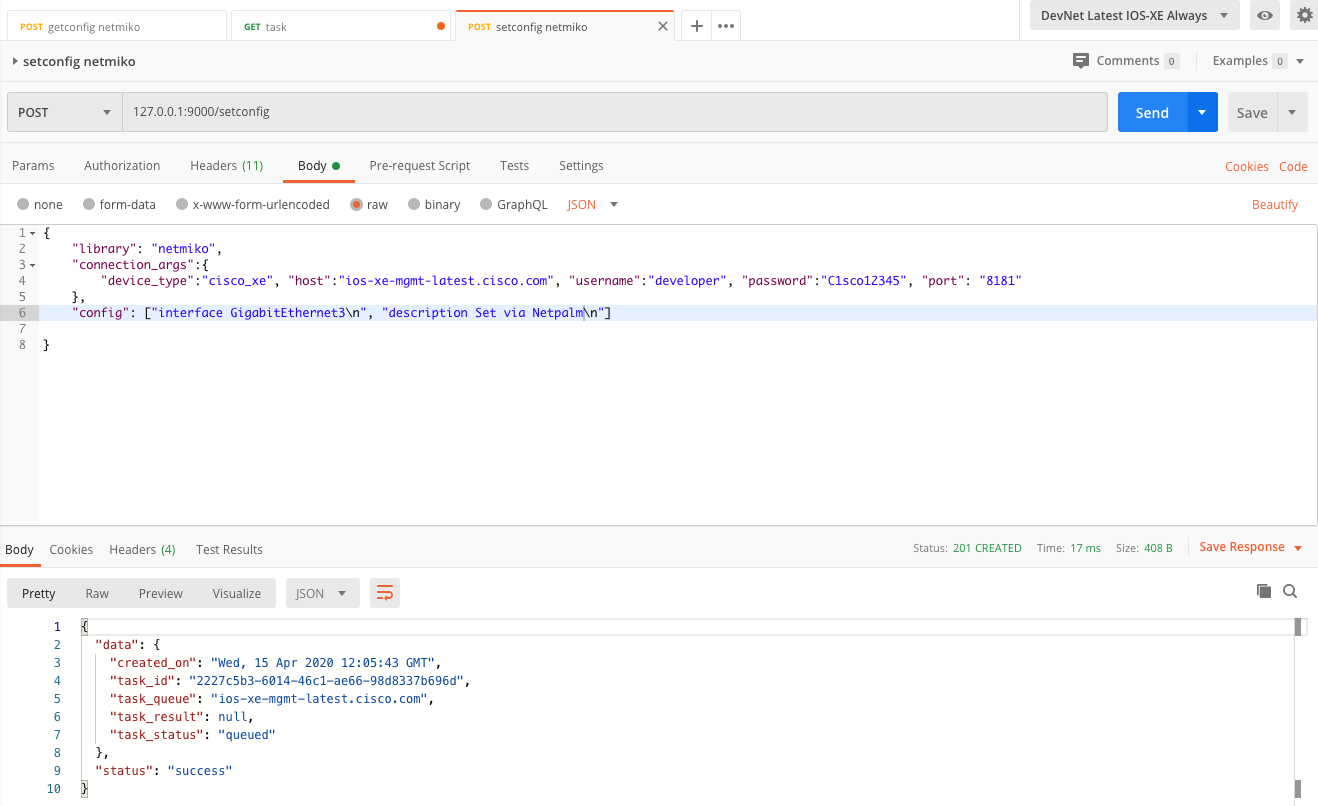 In the response, we get back a view on the changes we performed. Also note that the "status": "success" in our response. 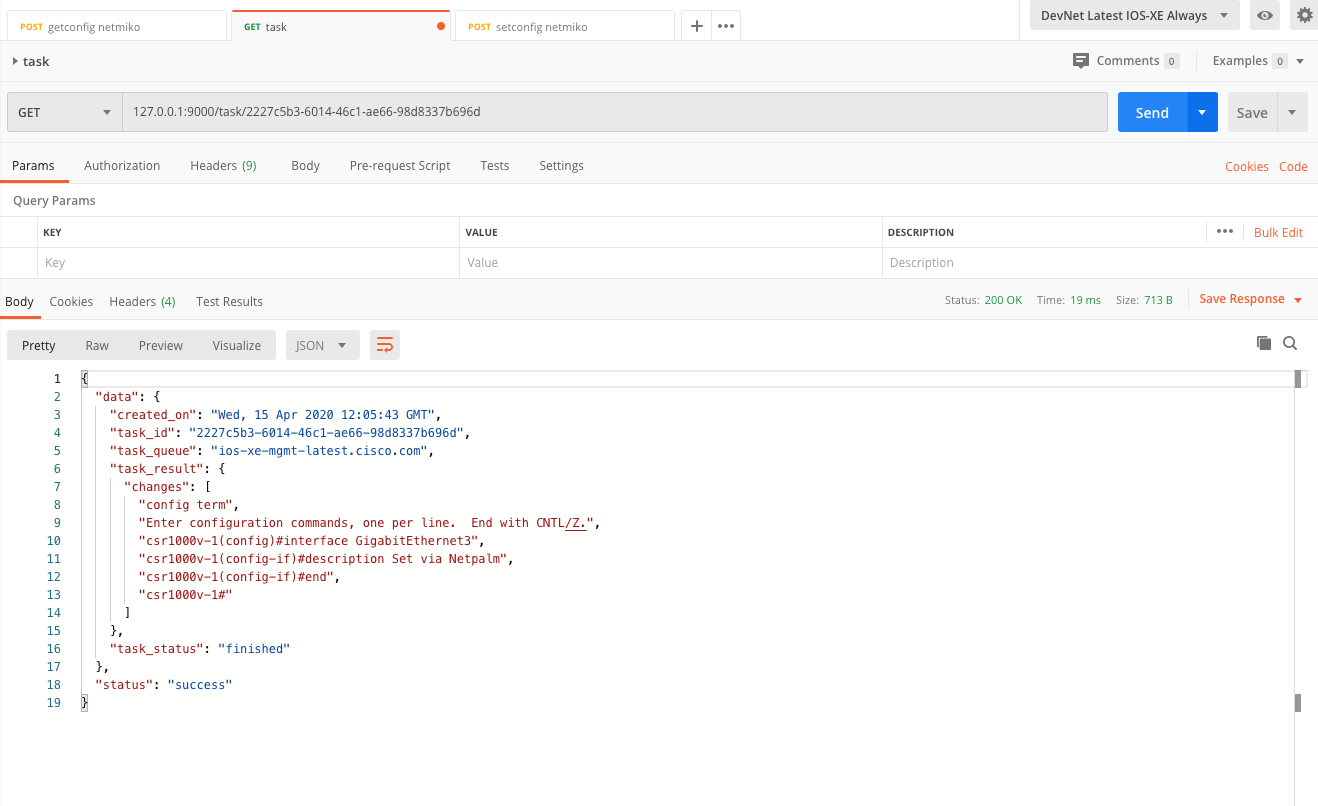 3.Query the interface to see if the update did work

Let’s have a look again at the interface description via the API we used in the first step. 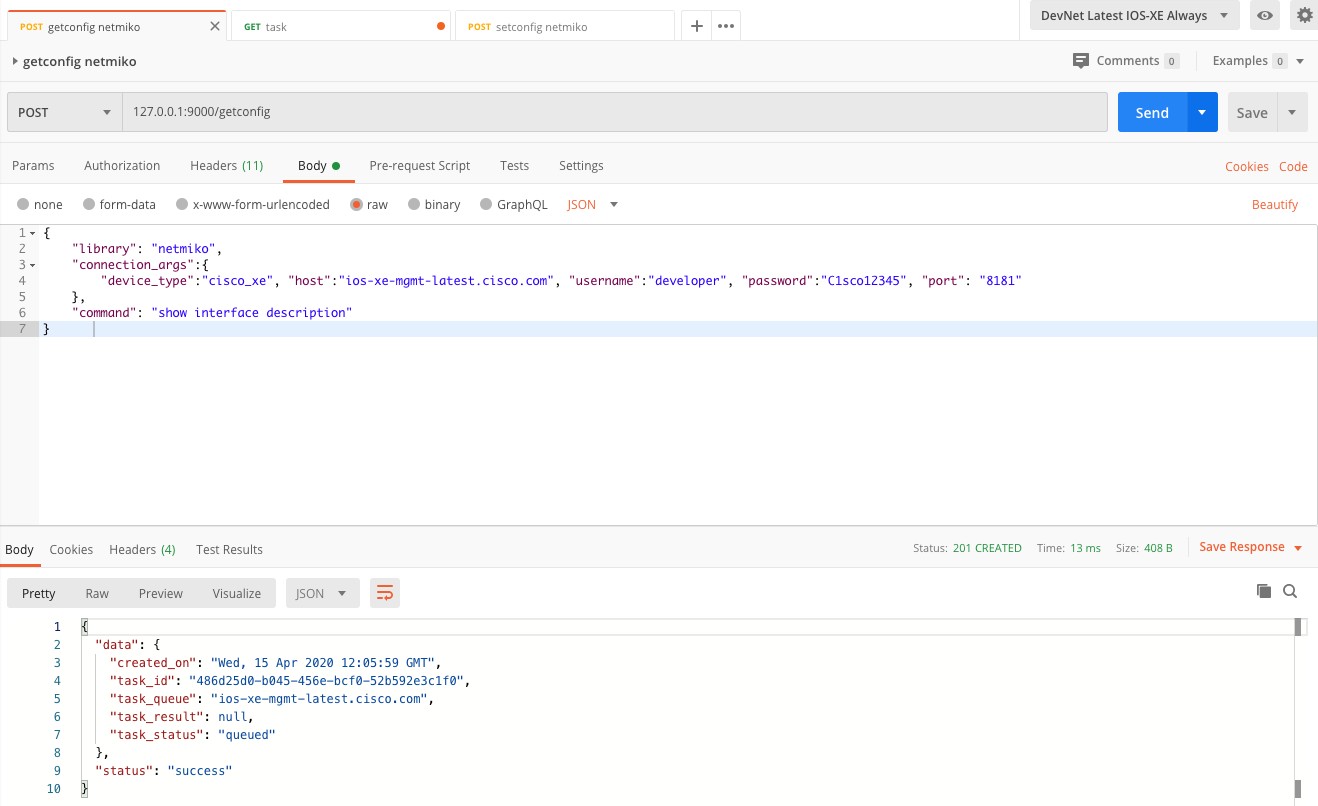 You will notice indeed that the interface description got changed to ‘Set via Netpalm’, just as we requested. 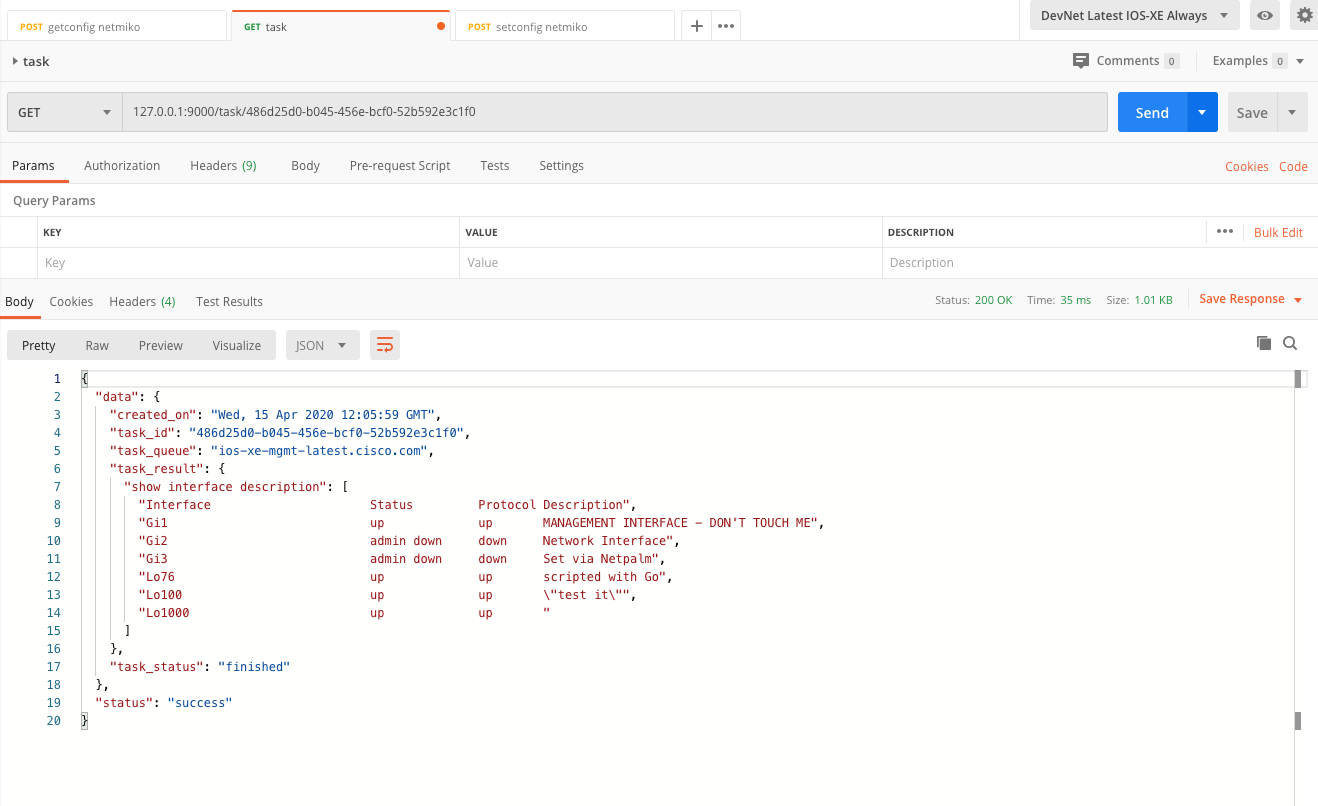 That’s how easy it is in fact to change some configuration on our device using Netpalm. Note, we could have just as easily used NAPALM as well to accomplish the same.

RESTCONF in general is a bit of a tougher protocol so I wanted to take the opportunity to provide some examples as well. Let’s give it a try to add an interface to our device.

Again we will do the following

Let’s first check what interfaces we currently have on our device. For this, we will be using RESTCONF to retrieve the information. In fact, it’s exactly what we learned in use case 4 from part 1. We could just as easily have used Netmiko or NAPALM for this but we saw this already in use case 1 above. 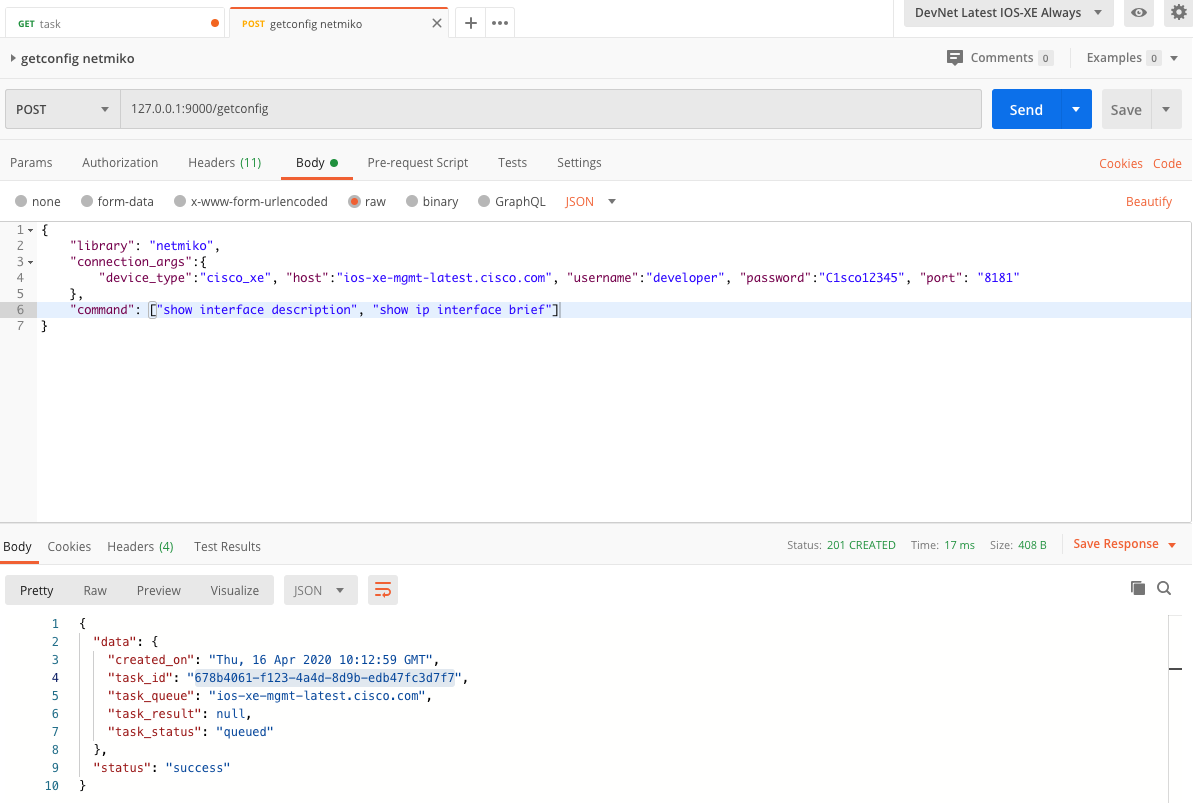 Using the task method, we can see the output of the show interface description and the show ip interface brief commands. 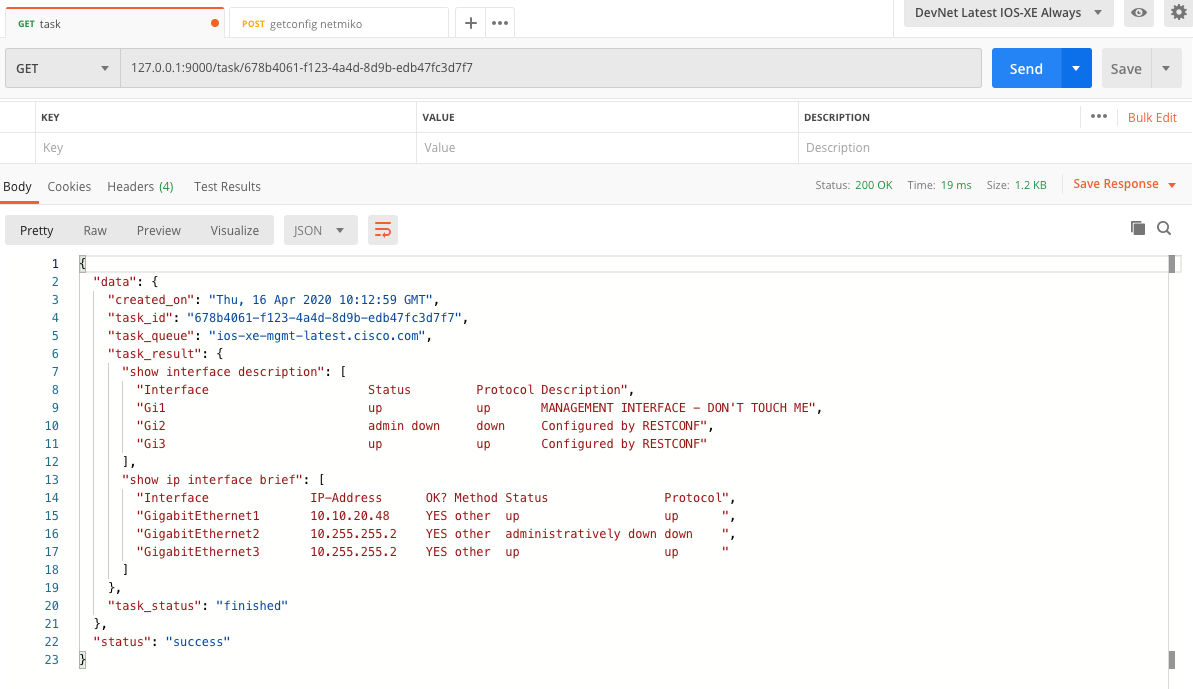 Alternatively, we can also verify the current list of interfaces using the good old CLI. I’ve logged in to the device via SSH to retrieve the list.

Let’s now add an additional interface (we will be adding a BDI100). NetPalm has an API for doing this, check it out here.

In below example, you see that we call the setconfig API and pass in the JSON body quite some information:

Note: we have done this already before in use case 6 of this post. Use the information from that post to understand the URI and payload in this example.

Below is the screenshot where we add (POST) an interface to our device. 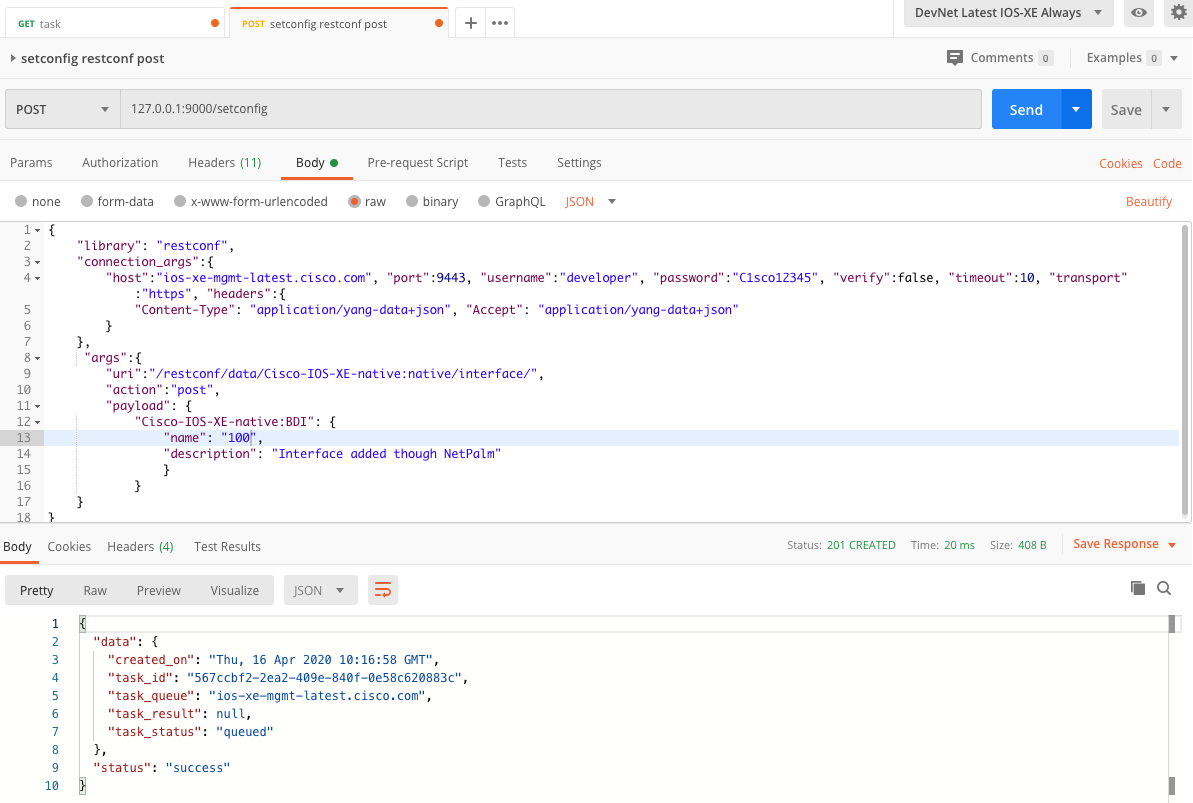 In the below screenshot, you see we basically get back an HTTP status code 201 from the REST API, which is a response code indicating something got created successfully on our device.

3. Query the interface to see if the create worked

See below screenshot to achieve this. Pay attention the action PATCH which indicates we want to update the configuration. 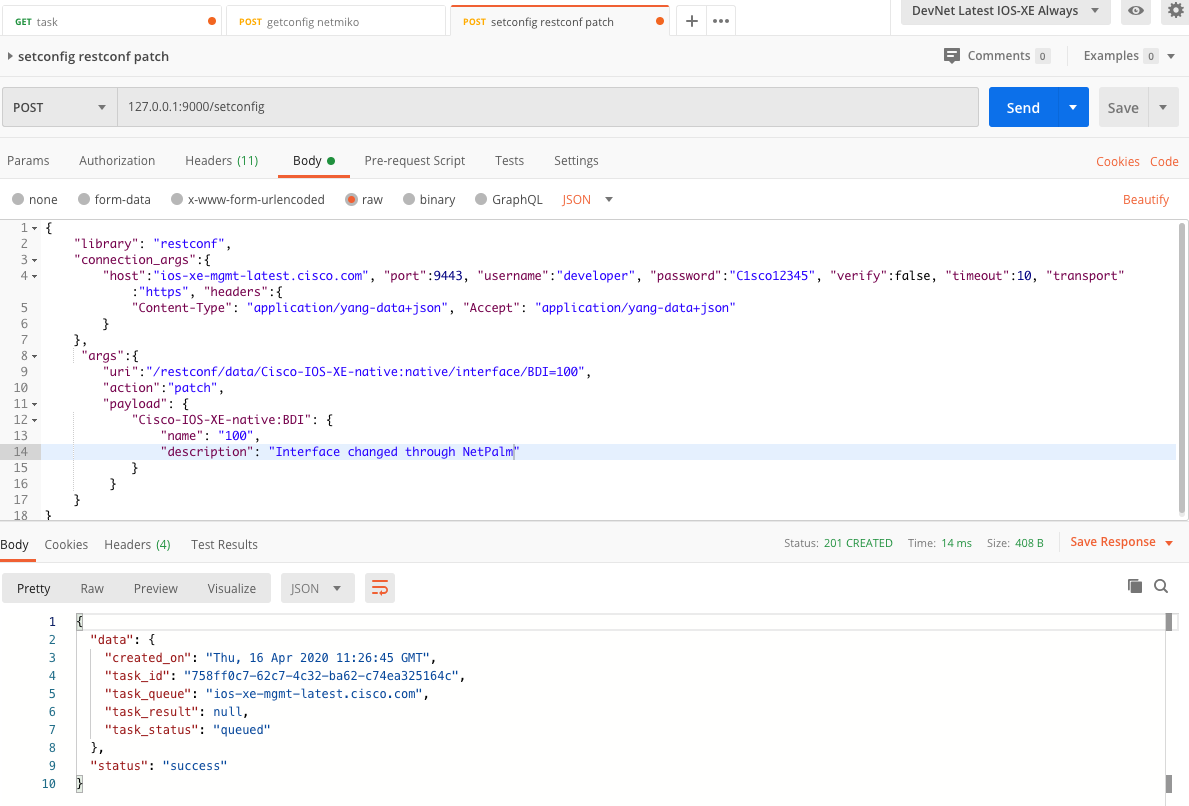 Again we get back a "status": "success" message indicating everything worked successfully.

Again, let’s have a look at our device through SSH.

Sure enough our interface description was changed successfully.

Let’s now also remove the interface we just added. We will be using this API to achieve that.

Next, let’s continue with deleting the interface. In below screenshot, you will notice that I point the URI to the exact interface we want to see deleted and we add the ‘delete’ method. 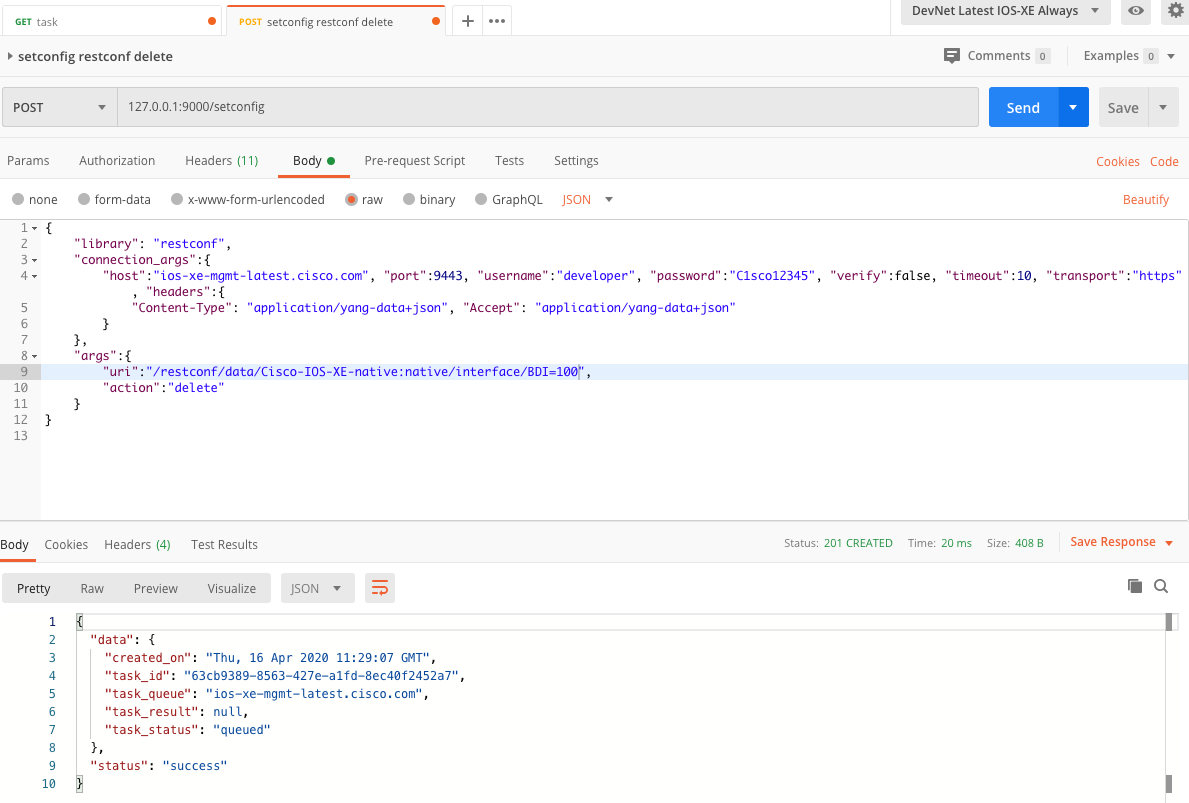 In the response, you will get back a status mentioning the action has been successfull. See below screenshot.

Next, we will issue once again the getconfig Netmiko method to verify our list of interfaces. Again, as mentioned already couple of times, we could have just used SSH to verify this, or NAPALM, or Netmiko or RESTCONF directly… 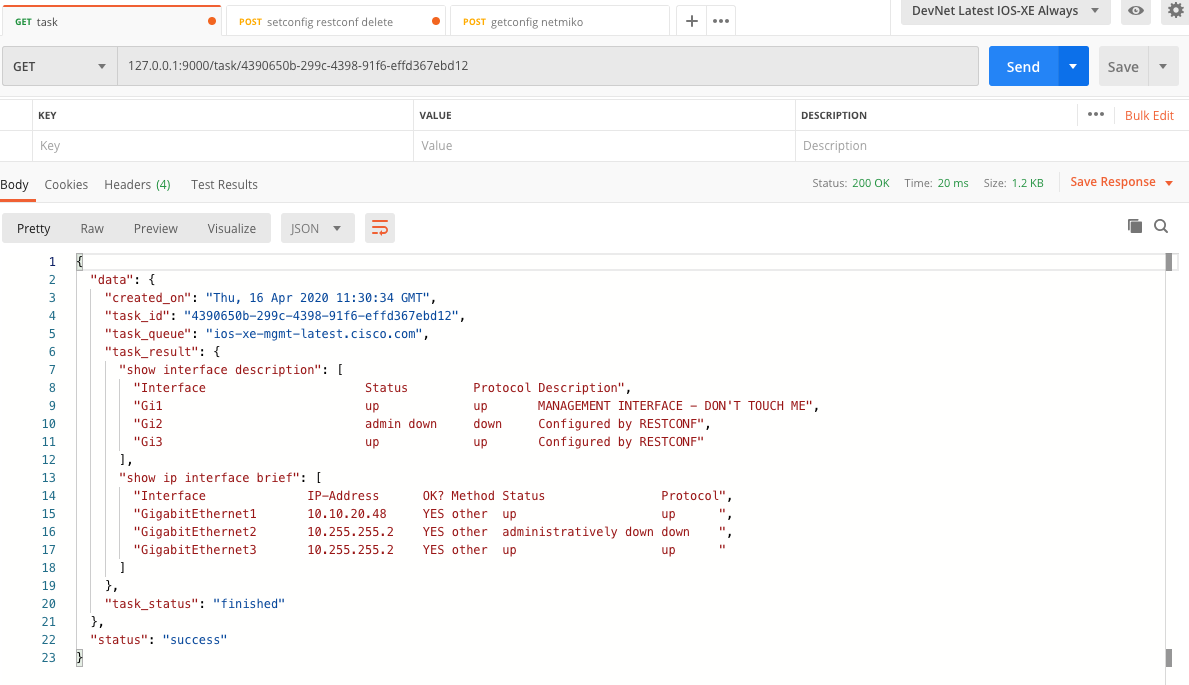 In a next blog post, we’ll dive deeper into some more advanced topics. Hope to see you back!